The Space Program – A Modest Proposal 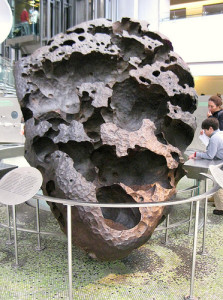 The Cape York meteorite, currently on display at the American Museum of Natural History, New York. Get back to where you once belonged. (Photo by AMNH)

A recent article on the status of the proposed Asteroid Retrieval Mission (ARM, or as I call it, the “Haul Asteroids!” mission) envisions a forthcoming partisan fight. The Verge article claims that the ARM, “strongly supported” by NASA, is opposed by Republicans on the Hill, with Congressional Democrats giving it only middling to tepid support. One could question the basic assertions of this piece at length, but what struck me was an unmentioned, key aspect of the ARM controversy – that NASA’s Small Bodies Working Group (SBAG, pronounced “s-bag” by those in the know), the committee of scientists who advise the agency on scientific questions and missions to small bodies such as asteroids, basically look upon this mission as irrelevant and silly. Because this community is the beneficiary of the scientific bonanza supposedly set to pour forth from this mission, this is important information.

The basic concept of the ARM is to first find a small near-Earth asteroid, collect it into an expandable bag and then attach a solar electric propulsion module to it. It will then be slowly returned to cislunar space and placed in high orbit around the Object-That-Cannot-Be-Named. Once there, this purloined space rock will be accessible for rendezvous by human crews using the forthcoming Orion spacecraft. When the crew encounters this captured and displaced object, they will hook on, chip off some pieces and return them to Earth for analysis.

What are these samples likely to tell us? We actually have an inkling of the knowledge they might provide from previous vast study of meteorites – those rocks from space that have fallen on the surface of the Earth for millennia. In fact, we may already have – now existing in the pages of the tens of thousands of scientific papers previously published on meteorites – the scientific information that the ARM allegedly will return. Talk about a knowledge revolution!

I’m at a loss to explain why one aspect of the ARM mission hasn’t been discussed in the media: seeing that advocates of the ARM think nothing about re-arranging the architecture of the Solar System for their convenience, environmental activists might object to the very idea behind the mission. We can’t get to a near-Earth asteroid with the Orion spacecraft and the Space Launch System (SLS), so let’s just drag the asteroid to us! Imagine a defenseless rock, innocently tumbling its way through space, only to be snagged, bagged, and defiled – appropriated and exploited by arrogant, human interlopers. There ought to be a law!

Then too, the SLS program has a problem. The out-years budget for NASA allows for the development of the launch vehicle and the supporting infrastructure that it requires, but no money is budgeted for payloads. This has led some agency officials to solicit possible unmanned, scientific payloads – missions that entail using large, massive spacecraft that need quick trajectories to deep space destinations. Although a few potential robotic science missions have been identified, there are not nearly enough of them to keep the SLS manifest fully populated.

These two ideas – appropriating an asteroid and a need for destinations for our new spacecraft got me thinking about finding some common ground. As I mentioned previously, meteorites have fallen to Earth for thousands – millions of years. The total amount probably exceeds several hundred thousand tons of material, of which we have only accounted for a few hundreds of tons. These former near Earth objects (NEO) came from space – their rightful domain before being captured by Earth’s strong gravitational pull. And as we’re sentient beings of conscience, we should both desire and strive to restore the natural balance of things in the universe, as we understand them to be.

So, I propose that we send the Earth’s collections of meteorites back whence they came. We should round up every meteorite in public ownership (the Curatorial Laboratory at the Johnson Space Center in Houston has hundreds of kilograms of meteorites collected in Antarctica) and load them onto SLS rockets. The abundance of meteorites currently residing unnaturally in museums could be confiscated, along with the NASA collection. Although many meteorites are privately held, an international law could be passed to outlaw their ownership and these too could be added to the launch manifest. The law could further decree that any future meteorite landing on Earth is the property of the universe and will be returned hence with dispatch. Earth will be deemed a no-meteorite-go-zone, kept clean of these foreign bodies, with all endangered space rocks released back into their natural habitat. Kumbaya all around.

By returning these rocks and boulders to interplanetary space, we’d have a multitude of “exciting” destinations for the Orion spacecraft and SLS launch vehicle while biding our time until our “ultimate” mission to Mars. It is the right thing to do for these rocks. After all, it’s not their fault that they ended up here on the Earth – thoughtlessly swept up by the gravitational monster that it pleases us to call our home planet. We could send some of the meteorites into low Earth orbit. There, they will provide endless hours of training and amusement for the crew on the International Space Station, keeping them on their toes to maneuver the station in order to avoid collisions (Look lively, m’lads!). Other meteorites would be sent out into deep cislunar space, including locations near the Object-That-Cannot-Be-Named. Once in space, these free ranging beauties will provide a wide variety of targets for human missions.

This simple but innovative and sustainable mission plan accomplishes several objectives simultaneously. We create new payloads for the SLS launch vehicle, thus avoiding the embarrassment of developing a new heavy lift vehicle with nothing to put on top of it. We create a variety of new target destinations for future missions, thus providing years of top-notch human spaceflight spectacles, as each previously studied meteorite is approached, encountered, studied and sampled again, this time within the confines of its own natural habitat. We correct a great planetary wrong by putting the Solar System back into its original, natural order. And we’ll rest easier, knowing that we have ensured a vibrant, continuing space program while at the same time “giving back,” as the currently popular phrase would have it. There will always be meteorites needing rescue to return whence they came. Here is a true mission into the future – appropriate for our time and one that will elevate our civil space program for decades to come.

33 Responses to The Space Program – A Modest Proposal