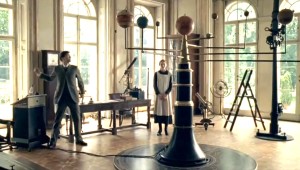 The clockwork universe — “overthrown” by relativity? (From Einstein and Eddington, BBC)

I enjoyed watching a couple of movies during the holidays. Covering important historical events, they detailed the back stories behind major scientific developments.

Einstein and Eddington, a BBC production from a few years ago (available on YouTube), is a dramatization of one of the most famous scientific experiments of the last century. The 1919 British expedition to Africa led by Sir Arthur Eddington, to observe and record a total solar eclipse, was undertaken to test Albert Einstein’s General Theory of Relativity.

The Imitation Game tells the story of Professor Alan Turing’s involvement in cracking Enigma – the German coding device used to encrypt the military communications and operations of the Third Reich. This successful, British top-secret effort by a group of scientists and cryptologists, is credited with saving many lives and for shortening the duration of World War II considerably.

While these two films are interesting and reasonably well told, what caught my attention were certain ideas implied by the narratives. Viewers need to be cognizant of history – and artistic license – when a filmmaker uses the descriptor “based on a true story.” In both cases, the story lines got some things wrong. In Einstein and Eddington, it was implied that the General Theory of Relativity (tested and validated by Eddington’s observations) “overthrew” Newtonian mechanics (the physics that we all learn in high school). At the end of The Imitation Game, we are told that “Turing’s Machine” (the collection of relays and rotating drums that was used to decode the Enigma messages) is “known today as the computer.” This statement implies that Turing invented the modern computer. I think that both of these “conclusions” (as they seem to imply) are wrong and do a disservice because they reflect a misunderstanding of how science works and the meaning of scientific knowledge.

Science is the process by which we explain nature. It involves not merely expensive laboratory equipment, white lab smocks and wild hair on absent-minded academics, but in reality, it is a way of thinking about problems. We observe the world and devise explanations for phenomena. Usually, most of these “guesses” are wrong. The most common misunderstanding about science is that it is a collection of immutable knowledge. Actually, it is a collection of the best explanations that we have at any given time. Any scientific explanation is subject to change, given enough compelling evidence. Researchers must keep an open mind about scientific explanations (called hypotheses), even those that have been long accepted by most workers (the scientific “consensus”).

When a hypothesis has been around for some time and continually passes whatever tests we can devise for it, it becomes elevated to the status of a scientific theory. Note well that this meaning of the word theory is very different from its common meaning in everyday speech. In common parlance, we typically use the word theory to mean what a scientist means by the word hypothesis, which is usually no more than an opinion (informed or not). But there is a very important difference.

In science, any hypothesis must be testable. To maintain its status as a viable concept, hypotheses undergo repeated testing. A million “passings” of an experimental test mean nothing against a single failure. If a hypothesis cannot stand experimental or observational scrutiny, it must be discarded. At best, it is incomplete; at worst, it is simply wrong. If a hypothesis continually stands up over time to many different tests, it gradually becomes accepted as a theory. Good hypotheses and theories not only stand up to rigorous testing, but they make predictions about what possible future tests will indicate.

The system laid out in Sir Isaac Newton’s Principia (1687) described a mechanistic world that was predictable and comprehensible. Its famous Law of Gravitation made testable predictions, one of the first being a precise description of the timing and location of the next apparition of the 1682 comet (now known as Halley’s comet), which promptly appeared again in 1758. The Newtonian system was so thorough and comprehensive that it was thought to be the definitive explanation for the way our universe worked.

Toward the end of the 19th Century, problems with Newtonian mechanics appeared. These involved diverse phenomena ranging between the extremely small and the extremely large. Problems appeared with the classical understanding of light as a wave. The orbit of Mercury did not conform to strict Newtonian predictions. Einstein, working to explain some of these discrepancies, concluded that classical Newtonian mechanics were not wrong – merely incomplete. It was only at the extreme ranges of possible measurement (such as very massive objects like stars, and very high velocities such as the speed of light) that these discrepancies were evident. Einstein went on to develop a new system to better describe the behavior of the universe in these extremes.

The contention of the film Einstein and Eddington that Einstein “overthrew” Newtonian physics is simply wrong. General Relativity (Einstein’s name for his model) doesn’t overthrow anything – it extends mechanics into realms with which Newton had no experience. Under normal conditions (i.e., human-scale interactions with nature), Newton’s equations work just fine. Only at the very limits of observational science do we find that we need relativistic mechanics. A good example of this is the use of GPS systems to navigate cars, ships and airplanes. Because GPS satellites move at very high speeds (orbital velocity) and use extremely precise (atomic) clocks, corrections must be made for the fact that relativity predicts that time moves more slowly the faster you travel. This relativistic time correction is needed to give the meter-scale precision that GPS can deliver.

One of the most interesting things about General Relativity is that it does not replace Newtonian physics – it encompasses it. When velocities and distances are more within the realm of normal human experience, the Einstein gravitational equation reduces to the Newtonian one. Thus, General Relativity did not “overthrow” Newtonian theory – it extended it into new realms. Scientific revolutions rarely overthrow systems of thought, more typically they extend and refine our knowledge. (One exception is the overthrow of the Ptolemaic Earth-centered Solar System by the Copernican Sun-centered one.)

Likewise, Turing’s Enigma de-coding machine at Bletchley Park was not the world’s first computer. Computing machines have been built for centuries, each new one being more advanced, more powerful and more capable than the last. If any one person should be granted the “honor” of being the father of the computer, it is probably John von Neumann, whose basic computer architecture is used in every computer today. Turing certainly deserves great credit for his ideas about algorithms and computable numbers, but a “Turing Machine” is a theoretical concept, not a practical computer. The work of von Neumann built upon and extended Alan Turing’s work (whose value von Neumann fully acknowledged). Newton notably expressed the cumulative process of learning in science when he said, “If I have seen further, it is by standing on the shoulders of giants.”

Science advances incrementally (small steps that contribute to knowledge) and cumulatively (each piece adds to the larger whole). It is also supposed to be self-correcting. Scientists must accept and acknowledge the concept that scientific knowledge is constantly changing and changeable. Thus, ideas like “the opinion of the majority of scientists” or “consensus” reflect not science but our current incomplete (and likely mistaken) state of knowledge. The worst science of all twists new observations, facts and discoveries inside out to preserve the viability of some existing model. A wide variety of current popular scientific ideas (such as the origin of the Moon and global climate change) belong in this category. The attractiveness or appeal of an idea is not relevant to its validity. Scientific hypotheses must be falsifiable. If they are not, we’re just chasing our tails.

I strongly recommend both films for enjoyable entertainment and insight into how science works – just watch out for the producers’ misunderstandings of it.

This entry was posted in Lunar Science, Philosophy of science. Bookmark the permalink.