What Do We Really “Need” From Space? 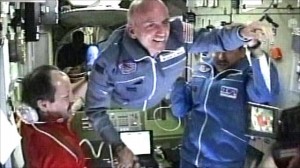 Because crepehanger thinking keeps cropping up – influencing mainstream writers and our national discourse, I want to share and comment on the Smithsonian Magazine’s latest Off the Road – The Travel Adventures of a Nomad on the Cheap post by blogger Alastair Bland, entitled Do we really need to take vacations in space?  The principal thesis of his piece is that although space tourism may emerge as a new field of human endeavor, such activity is undesirable because of its high cost and carbon footprint impact on Earth (Bland adopts the idea of “1000 flights a year, spewing 600 metric tons of soot” into the atmosphere from this 2010 piece).  The author indicates that (at least for himself) there are plenty of interesting places to explore (by walking and biking) right here on Earth.  Although a self-described “travel adventurer,”  Bland views space travel by the “extremely rich” as costly “science fiction” – dangerous to those participants, leading eventually to others following to exploit off-planet resources.  He suggests that instead of space tourism, we need to invest our time, effort and money into figuring out how to live sustainably on this planet – be content enjoying the simple pleasures of biking, hiking and swimming here on Earth.  I like biking, swimming and hiking and have indulged in all those activities, but I believe that we are on the threshold of learning to live and work productively in space – it isn’t an “either/or” situation.

Bland uses the concept of space tourism to denigrate the idea of space emigration and settlement (in fact, of emigration and settlement in general).  His attack is buttressed with the usual platitudes about the plunder and rape of our own planet – believing us guilty of despoiling the Earth, with plans to do the same on other worlds.  He challenges the concept that humans have any business extracting resources from extraterrestrial bodies, at least until we have sorted out “rampant poverty, pollution, inequality, starvation and extinctions” here on Earth.  From such discourse, one would be hard pressed to tell that we are now in the second decade of a new millennium – such thinking is identical to what was said in the 1960s about the “wastefulness” of our space program.

Bland’s use of the phrase “for better or worse” is particularly telling.  He uses it after his description of events that (I would imagine) most us think are predominantly good things, like the ability of ordinary people to make the trans-Atlantic crossing, or the settlement and development of the American west.  Based on the general thrust of the whole piece, the author appears to prefer to tie the “worse” consequences to human migration than to recognize the “better” ones.  Bland asks rhetorically, “Why must our species continue to advance?”  He finally (and resignedly) accepts that human expansion into space “may be inevitable” as we struggle to continue and increase our profligate and evil ways of mass consumption.

Have humans only used and abused?  The idea that we have no moral “right” to exploit the resources of space is closely tied to modern Malthusian philosophies of shortages and want, a favorite meme of the environmentally conscious and socially aware:  population growth and the hunger for resources and energy increases at an ever alarming rate.  Surely such trends portend doom!  We must repent immediately, reverse the rate of population growth, reduce our carbon footprint, and go live naked in a meadow somewhere peacefully munching grass, like a herd of placid cattle (no methane emissions, please).

The worldview behind such sentiments is that modern industrial civilization is inherently evil; that we should simplify our lives and go back to some Rousseauian state of nature, a pastoral existence when we lived peacefully with one other, sustained by nature and all was good and natural.  But there is another way to look at modern life:  More people are alive today than ever before and unlike the predictions of Malthus, they live better, longer, and happier lives than at any other time in history.  If shortage and want are inevitable, why have they decreased with time?  The most famous predictions of modern doomsayers have yet come to pass and yet invariably, they are not only listened to but also ardently believed and promoted by many, especially in the academy.  Nations falter and their economies constrict when such ideas are designed, popularized and eventually take root.

Space is simply another realm for humanity to venture into and use.  It is no more “immoral” to access and use some space material (such as water from the Moon) than it is to gather sunlight and generate electricity from a solar panel on a spacecraft (an activity of which I suspect Mr. Bland would heartily approve, and yet he describes the possible use of planetary materials as “plundering the resource banks of other worlds”).  The idea that using resources causes human suffering is ridiculous – most human suffering is caused either by naturally occurring events or by those who take by coercion or force that which they do not own – demanding that others live according to their prescription and ideology.  Compared to remaining on Earth, a huge advantage of developing space resources (both materials and energy) is that they are – literally – inexhaustible and infinite.  By learning to access and use what is available in space, insights and innovations unimaginable now will be revealed, answers to questions we cannot formulate yet will be answered, and the possibilities for humanity (on Earth and beyond) will grow exponentially.

What do we “really” need from space?  We need the freedom to be pioneers, to explore everywhere and create from everything that is available and awaiting use in our ever-expanding universe.  We are on the verge of a completely new age of innovation and plenty.  By tapping the material and energy resources of space, we will not only survive – we will prosper.  That others would question our natural urge to go over the next “hill” or that they would suggest placing limits on the rights of others to pursue new horizons (shunned until Earth is made to work to their liking and timetable) is indeed folly, fraught with dangerous restrictions and biases that advanced and vibrant societies do not and will not entertain or subscribe to.

As a way of showing respect for the Earth and its physical boundaries, Alastair Bland proposes that we stop advancing and remain on Earth.  Mr. Bland needs to exercise his sense of adventure and open his mind to other possibilities – to seek and travel the “off-road” path to the stars.  Mother Earth might even approve.

This entry was posted in Lunar development, space policy. Bookmark the permalink.

13 Responses to What Do We Really “Need” From Space?