To the Moon – Again 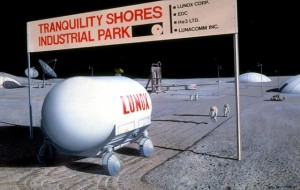 A future industrial operation on the Moon. Possible or not? (Artwork by Pat Rawlings)

A NASA-sponsored study has been released which outlines a plan to return to the Moon with people and set-up an outpost at one of the poles to mine water for propellant. This report has drawn both attention and puzzlement within the space community, as the agency continues to make clear that they have no interest in human lunar missions. This disconnect is covered because NASA will not do these activities – instead, the agency will pay commercial companies to develop and implement the plan. The propellant produced at the outpost from lunar polar water will then be sold to NASA for use in future human missions to Mars.

I find both positive and negative aspects in this report. I am gratified that another study recognizes the great leveraging power for spaceflight offered by the development of lunar resources. Most NASA lunar mission studies have invariably incorporated resource utilization only in the form of small-scale demonstrations or flight experiments. In contrast, this effort makes the production of water from the Moon’s polar deposits the principal mission objective – a definite step forward. The architecture also makes significant use of robotic machines on the Moon for most of the mining and processing activities, another positive development. Because of the Moon’s proximity, controlling robots on the lunar surface in near real time permits the early establishment of processing facilities using operators on Earth, rather than on the Moon. In these ways, I find a lot of similarity with this plan and the architecture designed in 2011 by Tony Lavoie and myself.

On the other hand, there are some strange aspects to the report that warrant attention. Early stages of the program call for human crews to be sent on equatorial surface sortie missions prior to the establishment of the polar outpost. Presumably, these missions will test and prove the equipment and vehicles needed for routine lunar surface access later. But sortie missions to equatorial or mid-latitude sites offer no real benefit to the ultimate aim of the architecture: the establishment of propellant production facilities at the pole. There is no good reason for not sending the first human missions directly to the locations where our future activities will happen. There is also no rush to do so – much can be accomplished in advance of human arrival with robotic machines under the control of operators on Earth.

The architecture calls for a series of robotic missions to reconnoiter, prospect and survey potential mining sites prior to human arrival. This approach is an absolute necessity, as much is still unknown about the nature and composition of the polar ice deposits. Apparently, there has been little to no scientific input to this report regarding the consideration of actual prospecting and mining activities, a significant shortcoming. Although the study acknowledges that the unknowns of polar ice mining constitute a “major risk” to the program, that risk can be at least partly mitigated now through the incorporation of results from current research. Known facts are misstated (e.g., water concentrations) and unattributed, a general shortcoming of this effort. It is critical to demonstrate ISRU (in situ resource utilization) with robotic precursors prior to outpost commitment, but the report does not indicate what levels of production constitute success or failure of this milestone. Insufficient detail for the robotic missions likely indicates that these aspects have not been designed or imagined, e.g., the need of power and communications for polar robotic spacecraft requires a significant supporting infrastructure that is not described.

The principal object of the lunar outpost in this plan is the production of water to be converted into cryogenic hydrogen and oxygen for use as rocket propellant. The report envisions this lunar propellant (about 200 metric tons per year at the end of outpost emplacement) as enabling human missions to Mars by reducing the total number of required SLS heavy lift vehicle launches required for such a mission from 12 to 3. But the study does not mention an even more tangible, practical benefit – that the availability of lunar produced propellant not only enables human missions to Mars, it creates routine access to the entirety of cislunar space. We could visit all of the locations of cislunar space (e.g., GEO, L-points) with people and machines to emplace, construct and maintain new satellites of potentially enormous power and capability. A fleet of space-based flight assets in cislunar space, provisioned by the products and propellant produced on the Moon, constitutes a transportation system that can serve nearly all of our space needs for the next century.

The cost analysis of this architecture has drawn much attention. Indeed, more print space is expended on the allegedly low total cost of the project (23 pages) than on the technical aspects of establishing a lunar presence (20 pages). The remainder of the 100-page report deals with risk management and organizational structures. The report claims that by using their approach, the establishment of the polar outpost would cost $40 billion, plus or minus 30%. At first glance, this estimate seems exceedingly low, but it is comparable within about a factor of two to the cost analysis numbers run for the Spudis-Lavoie predominantly robotic architecture (our cost total is $88 billion, of which 30% is reserve). Where do their low cost estimates come from? Primarily from the assumption, widely held in the New Space community, that a COTS-like model of implementation will produce cost savings of factors of eight to ten.

In their model, NASA simply provides the money and industry designs, develops and performs the missions and program. This architecture critically relies on SpaceX’s “Falcon Heavy” for the delivery of propellant to LEO – a vehicle that has yet to materialize, even in structural mock-up form. The Falcon Heavy design consists of three Falcon 9 vehicles, constituting a total of 27 engines, strapped together and using cross-feeds for fuel. In concept, it is similar to the old Soviet N-1 rocket, which used 30 engines; that vehicle was launched four times and never successfully. Even if Falcon Heavy works as advertised, we have no idea what its ultimate cost per flight might be. Its 53 metric ton to LEO payload capacity has no obvious commercial customer; satellite manufacturers design their spacecraft to fit on Atlas or Delta expendables (with a mass limit of about 30 metric tons), so the excess lift capacity either goes to waste or must be sold to co-riders. I frankly find the quoted cost of $90 million per flight of Falcon Heavy unbelievable, especially as the vehicle has not yet flown.

But the new plan willingly accepts this advertised sticker price, largely on the ideological belief in the New Space trope that it can do more in space with less money. The NASA program to deliver cargo to the ISS using commercial launch providers is cited as an example of the benefits of the new business model. In fact, we arguably spend more money now for payload delivered to ISS on the Dragon (about $9,500 per kg) than when Shuttle was operational (cost usually quoted as between $5,000-$10,000 per kg). All equipment, assets and operations remain the property and responsibility of the lunar “development authority,” an entity established by the plan consisting of a consortium of private companies and international agencies to accomplish the mission. So American (and possibly other nations’) taxpayers pay for a lunar outpost, but they don’t own any of it. And when it eventually does come time for a human Mars mission, NASA will pay for the lunar-produced propellant, even though they would have already paid to develop the system that acquires and delivers it.

Which brings me to a final (possibly critical) aspect of this plan. One reason I favor the federal government leading a return to the Moon is that it establishes our national, collective rights to use the Moon and cislunar space for a wide variety of purposes, including all of our economic, scientific and security needs. In possible future disputes with the space efforts of other nation states (such as China), it is not clear that this “development authority” will possess the stature or the assets to prevail. Nations can and do go head-to-head, but when nations go against corporations (for- or not-for profit), corporations seldom come out on top.

The development of the Moon and cislunar space is critical to national strategic needs – it is not some carnival sideshow that we should relegate to a second-tier space program. While I applaud this effort as a contribution to the technical literature of lunar return, I have serious doubts that the plan as presented will work. New Space has a long history of talking big and promising bigger, but their follow-through and delivery has been more run of the mill. Undertaking a major, innovative space program is beyond their capabilities now and may remain so for the foreseeable future.

Still, setting aside concerns over this plan’s feasibility, the glaring issue of our weakened national space posture remains. The traditional role of government is to represent us collectively and to protect our national interests. A lunar development authority would possess neither those ethics nor the means to do anything about them. We are not the only ones interested in the Moon and cislunar space, and it is still a dangerous world. The federal government, of which NASA is a part, should take steps to assure national rights of access and activity in cislunar space and the Moon. It should be noted that in the section of the report listing the “pros” and “cons” of a development authority, these critical national priorities are not even considered.

88 Responses to To the Moon – Again