More Than Life Itself: Some Heretical Thoughts 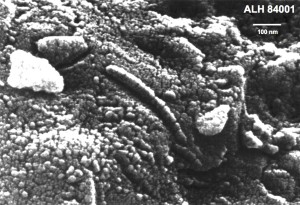 A Mars rock with bugs?  Scanning electron microscope image of alleged fossil bacteria in a martian meteorite. These features are extremely small (note the scale, in nanometers, i.e., a billionth of a meter).  NASA image.

In a letter to Space News, current CEO of The Planetary Society, Bill Nye, expounds on his belief that the search for life on Mars is the both the principal rationale and objective of human spaceflight. Many members of the Planetary Society subscribe to this belief, as do many others in the space advocacy field. Certainly, upon reading through various decadal studies of the planetary science community, it quickly becomes apparent that searching for extraterrestrial life is the major goal of space exploration and other topics are noted as to the degree with they contribute to the search for life. Where does this deeply ingrained idea come from?

Setting aside for a moment the decades of science fiction dealing with invaders from Mars and a variety of BEMs (Bug-Eyed Monsters) from space, this quest for life (as a driving imperative for the space program) took much of its impetus from Carl Sagan (1934-1996). Sagan, who popularized space science in his TV series Cosmos, is renowned for speaking and writing about the possibility of extraterrestrial life. Sagan became famous by pontificating on the “billions” of planetary systems that must exist in our galaxy, explaining (on the basis of our scientific understanding of how life arises) that many millions of them must be teeming with life. The science fiction concept of extraterrestrials was thus elevated and dignified by a seemingly irrefutable scientific argument, and this combination steam-rolled NASA into making the Quest for Life Elsewhere (QFLE) a cornerstone of its rationale for existence and its space exploration strategy. NASA’s quest to inspire (and let loose the floodgates of funding) saw gold in Sagan’s appeal to the public.

From our earliest recognition that Mars was a planet similar in size and composition to the Earth, it has harbored humanity’s hopes for the discovery of extraterrestrial life. Dreams of “life” were dashed when the initial flyby mission showed a cold, cratered surface, more like the Moon than like the Earth – a desolate Mars with an extremely thin, carbon dioxide atmosphere. In 1971, the Mariner 9 orbiter rekindled hopes of “life” when it showed channels as natural features on the surface. These landforms are difficult to explain by any process other than flowing water, and water is a prerequisite for life. Two Viking landers were launched to Mars in 1975, configured with the express objective of searching for evidence of (microbial) life in the martian soil. Nothing was found, except for some strange and unexpected soil chemistry. No organic matter was found in the soil at the parts per billion level, suggesting that not only was there no life there, but that some chemical process on the surface was destroying carbon compounds that did exist (we knew that they were being deposited on the planet by meteorite impact).

Thus, for the twenty years following Viking, Mars was considered dead, although many speculative efforts tried to envision how life might have arisen there in the past and then went extinct, as the climate changed from an early wet, warm and thick atmosphere to the current cold, dry, and thin conditions. Another round of robotic missions to Mars in the 1990s rekindled interest in possible life – or at least fossils – that could exist there. Since then, we have sent some type of robotic probe to Mars at nearly every launch opportunity (which occur every 26 months). Each mission has discovered that: a) Mars once had liquid water near the surface; and b) could have developed life. Each announcement of these astounding results is accompanied by much press hoopla as the again “new” findings are heralded and papers are published.

Concurrent with these findings was the astonishing result that perhaps life had already been found. Scientific study of the meteorite ALH 84001 showed extremely small rod-like forms that look similar to terrestrial bacteria. This space rock is one of a group thought to have come to Earth from Mars, blasted off the planet by an ancient impact. If all of these inferences were correct, then we may have already discovered fossil life from Mars! However, these interpretations are not universally accepted – indeed, they are not accepted by most of the scientific community today. Thus, the QFLE continues.

Just why is the idea of martian microbes so compelling? Although motivations vary, many in the space community have embraced the QFLE in relation to Mars because it has been good for business. The discovery of the possible fossils in a martian rock in 1996 inspired and spawned an entire Mars exploration program, one responsible for the launch of 11 American and 7 international spacecraft (and still counting) to the red planet over the last 20 years. Each mission repeats the new discovery that Mars “probably” was conducive to life early in its history. We can’t stop now – this elusive goal is just around the next bend!

Two issues present themselves in regard to the QFLE, especially as applied to Mars exploration. First, is the QFLE a valid rationale for a space exploration program? Second, if extraterrestrial life were found there, so what and what then?

Clearly, as they have embraced it as their rationale for space exploration, NASA is endorsing the QFLE. I have two issues with this adoption, one practical and one philosophical. On the practical side, if you define your objective around the search for life and you don’t find it, by definition, your mission is a failure. One cannot prove a negative, so not finding life or evidence of former life does not prove that it never existed. The only response QFLE advocates have to such a negative result is that “we just haven’t looked in the right place” and thus, additional missions or experiments are needed. This gambit works for a while (at least, it has worked up until now), but eventually, the public will get wise and decide that enough is enough. Thus, using the QFLE as a rationale for spaceflight contains within it the seeds of its own demise, as finding life or evidence for its past existence is an unlikely occurrence (it has yet to happen in 50 years of planetary exploration).

On the philosophical side of the issue, I contend that the QFLE, while a legitimate scientific inquiry, should not be the all-consuming justification for our space endeavors. It is certainly no more important than all of the other questions about the origin, history and evolution of the planets that we have developed over the years. By focusing on the QFLE and making all other topics subservient to its needs, we preclude opportunities for discoveries and breakthroughs in fields unrelated to biology. But more insidiously, by questing for life, we are attempting not to make a new discovery, but to confirm an existing dogma. Virtually all scientists subscribe to the materialist paradigm for the origin and development of life, viz., that given the right chemistry and environment, life will arise and over geological time, it will evolve into many different, ever more complex organisms. And if, or when, extraterrestrial life is found, what will have been proven? That our materialist model is correct? What scientist doubts that now?

By necessity, most planetary scientists follow the money and because special pots of funding have been set aside for the study of extraterrestrial life, many orient their research in that direction (one must eat, after all). But that funded scientific “interest” is not a product of the free marketplace of ideas deciding which topics are most important, but rather the directed result of a bureaucratic decision.

Well, I don’t agree. I believe that the really important breakthroughs and insights of science tend to come from totally unexpected connections and conceptual breakthroughs, not from some finding that everyone has been expecting for the last 100 years. By making the QFLE the central objective that propels our national space program, we’re ignoring other objectives of equal (if not greater) importance and significance. Moreover, we’ve set the program up for an abrupt termination when the long-sought evidence for life fails to turn up. But even if life or evidence of former life is found, all we have done is to validate our existing prejudices. I sense that this realization is gradually creeping into the consciousness of others in the space community, as some advocates of human Mars exploration are emphasizing habitation and settlement, rather than the search for martian life.

The universe is big and displays many interesting phenomena for us to study. To make the QFLE the main focus of our scientific exploration efforts is to ignore or give short shrift to other equally engaging problems. It also has the potential to cause a loss of political support for the program – the public “excitement” that it seeks.

NASA and Congress are always asking: What will inspire the people? We don’t need another Sagan – what we need is a permanent path to everywhere in space. The quest for everything can begin once our leaders move beyond believing that we need gurus and gimmicks to inspire and sustain a great space program.

28 Responses to More Than Life Itself: Some Heretical Thoughts