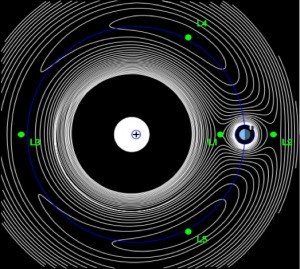 The L-points of a planetary system. The L-2 point is located on the opposite side of the Moon, about 60,000 km above the center of the far side.

A recent report by the NASA human architecture team has given us a glimpse of the agency’s thinking about future missions beyond low Earth orbit (LEO).  Interest is focused on sending human crews to a “Gateway” outpost stationed at the gravitationally stable Earth-Moon L-2 point.  The facility, built with plans and parts derived from the construction of the International Space Station, would slowly circle the L-2 point in a halo orbit.  From its “hovering” position over the lunar far side, it would be in direct communication with Earth.  Astronauts stationed at the L-2 Gateway would communicate with robotic spacecraft on the surface of the lunar far side – directing rovers to collect samples and emplace geophysical and astronomical equipment.  An L-2 Gateway station could be a staging point for future human missions to the lunar surface, near Earth asteroids, and to Mars and its moons.

The Earth-Moon system contains five libration points (also called Lagrange points, after the astronomer who first described them).  L-1 and L-2 are found 60,000 km above the center of the near and far sides, respectively.  The L-3 point is directly in-line on the opposite side of the Earth, at about lunar distance.  The L-4 and L-5 points also occur at lunar distance (lagging and leading the Moon, respectively).  Because of solar tides and other effects, only the L-4 and L-5 points are stable, though a spacecraft positioned at any L-point can remain there with minimal maintenance.  The advantage of the L-points is that they maintain a constant position with respect to Earth and Moon, so very little energy is required to go from any of the L-points to other places of interest in cislunar space (such as geosynchronous orbit, low Earth and lunar orbit and the lunar surface).  For planetary missions, they offer an assembly point with low departure energies and extended launch windows.

I have described elsewhere the value and potential of cislunar space.  This region of space – the volume of the Earth-Moon system – is where the vast majority of space assets reside. The first step to becoming a true space faring species is the ability to routinely and frequently access various levels of cislunar space.  Occupying these areas solves part of the problem, getting to and from these various places (rocket firings) creates capability.  Rockets need propellant – to fuel and refuel.

How, and from where, would this propellant be supplied?  The idea that we can assemble caches of rocket fuel in space for use by vehicles going to and from LEO has been around for years.  These facilities (propellant depots) would allow the fueling of transfer vehicles and re-fueling for future use upon their return.  Some models call for depot propellant to be supplied from Earth and stored to go beyond LEO.  To work, that vision banks on breakthroughs to lower the current cost to LEO.  Others believe that what really makes a depot system work is the harvesting and use of propellant from off-planet sources, (usually hydrogen and oxygen from the Moon and asteroids).  These fuel sources require much less energy to deliver to depots than propellant delivered up from Earth’s surface, hence significantly lowering overall costs.  The challenge is setting up a system to acquire the propellant and distribute it to the fueling stations of cislunar space – an endeavor that would establish with some certainty, our ability to live and work in space.

The architecture devised by Tony Lavoie and myself was our attempt to design a strategy to set up this propellant delivery system at minimal cost.  In brief, we propose to use robotic assets (operated remotely from Earth) to mine and process lunar polar water, and deliver it to processing stations in cislunar space.  Using non-terrestrial water to make propellant cuts the logistical cord between Earth and space and creates routine access to all of cislunar and interplanetary space.

How does the proposed Gateway L-2 concept fit into such a scenario?  It depends.  In its current efforts, the focus of the NASA architecture team is to design a human mission that goes beyond LEO (using the new Orion/SLS spacecraft currently under development) to demonstrate human “presence” at some destination.  This mission profile does that, but what then?  The initial suggestion is that astronauts at this L-2 station could control robots on the far side of the Moon.  The lunar science community has long desired a sample from the floor of the largest crater on the Moon, the massive South Pole-Aitken basin centered on the lunar far side.  Moreover, certain geophysical and astrophysical measurements can be uniquely undertaken there.  So, one concept has the crew at L-2 Gateway exploring the lunar surface with teleoperated rovers (landed separately) on the far side of the Moon.

In a way, this is “make work” for the crew at L-2.  The use of astronauts to teleoperate surface robots on the far side of the Moon is possible, but offers no real advantage over their remote control from the Earth.  Much is made about the “latency factor” of time delay, but the specific tasks envisioned by these missions (i.e., the retrieval of a few kilograms of rock and soil and the deployment of a long-lived scientific station) could be satisfied by teleoperation with the three-second time lag imposed by the Earth-Moon distance.  In contrast, operation from L-2 will experience a 0.4 second lag – shorter, but worth the effort?  The completely robotic New Frontiers SPA sample return mission was originally envisioned as controlled from Earth.

The extent to which telepresence is needed for effective geological exploration is unclear.  This is a result of both the relatively primitive state of telepresence technology (e.g., still awaiting very high bandwidth visual and tactile sensory systems) and our poor understanding of the “field exploration experience” from a human cognitive viewpoint.  My experience with using remote systems to do geology has been less than edifying.  I find that both poor situational awareness and the diversion of concentration on technical issues of the human-robot interface, results in significantly less time spent conducting true surface exploration.  In other words, as a replacement for human field work, telepresence leaves a lot to be desired.

My sense is that this mission is a hammer looking for a nail.  Manually operating a robot from an L-2 Gateway station – one that could be just as well controlled from Earth – does not add value but rather distracts from the real importance and necessity of creating a cislunar transportation infrastructure.

An L-point outpost needs no special justification if it is part of a complete Earth-Moon cislunar transportation system.  Such an outpost could serve as an extraterrestrial port of call – to fuel and transfer to destinations throughout cislunar space.  To make an L-2 gateway useful, it must be supplied by propellant.  That propellant is present and awaiting harvest only 60,000 km away on the lunar surface.  Unless a facility is on the Moon making propellant for export, we are not creating and operating new spaceflight capability – we are simply flying another mission to give the impression (falsely) that something has been accomplished on the “Flexible Path” and that NASA knows where it is going and what it is doing for long-term human space exploration.